Tropical storm “Bebinca” has emerged as the latest threat to Thailand, as it is expected to bring heavy downpours to many parts of the country until tomorrow.

“With this storm hovering in Vietnam between August 15 and 16 [today and tomorrow], rainfall will also rise in Thailand. Dams and main rivers in the country’s North, Upper Northeast and the East will have to deal with a bigger water volume,” Somkiat Prajamwong, secretary-general of the Office of the National Water Resources (ONWR), said yesterday.

On August 2, the government created a war room to address Thailand’s flood situation, and representatives from relevant authorities have since been working on analysing data and integrating water management.

“We will issue one update daily when the water situation is normal, but updates will be issued every three hours for overwhelmed reservoirs,” Somkiat explained yesterday, adding that constant updates will help people take timely action.

Heavy downpours, after all, come with the risk of flash floods, inundation and landslides, and in serious cases, these disasters do not just cause damage but also claim lives. Late last month, several people died in Nan province due to rain-induced landslides.

“I am closely monitoring the Nam Oun River’s water level now, because I am worried,” Sompong Pachai, a resident in Sakon Nakhon province, said. 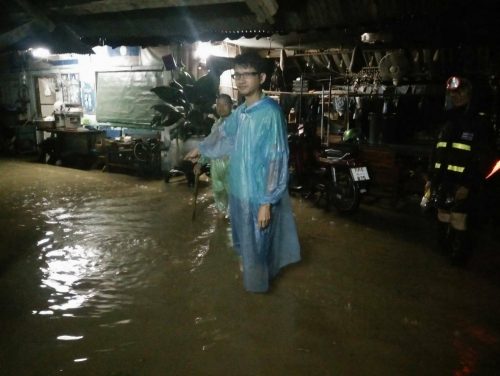 In Chiang Rai province, the Huai Khrai dyke was overwhelmed by Monday night due to heavy rain, and locals living in low-lying areas spent all night moving their belongings to higher ground.

In a related development, the Disaster Prevention and Mitigation Department yesterday cautioned people living in Surat Thani, Ranong and Phang Nga provinces to beware of possible landslides and mudslides. 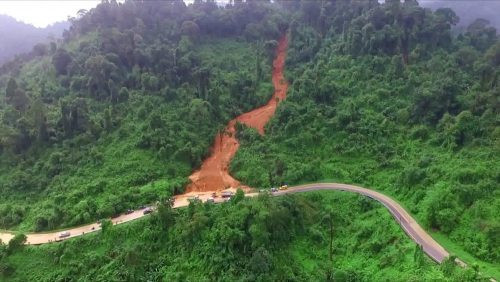 In Ranong, a landslide partially blocked more than 100 metres of Phetkasem road.

Meanwhile, in Nakhon Nayok province, which is a few hours drive from Bangkok, relevant authorities are on 24-hour alert in case of emergency.

On Monday, runoffs from the Khao Yai National Park flooded downstream zones, stranding many tourists as well as a team of film crew. This prompted authorities to rush to help. 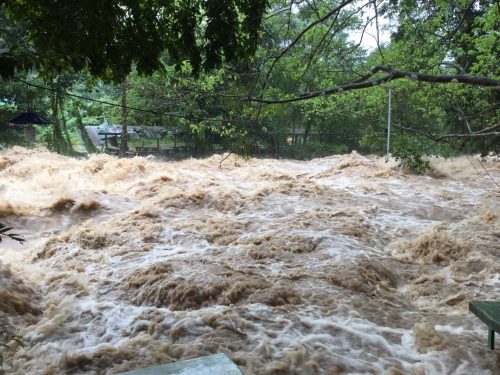 A warning has now been issued to 21 villages along Nakhon Nayok River, which can accommodate just 200 cubic metres of water per second.

Though flooding in Nakhon Nayok has subsided without any report of casualties, the Khun Dan Prakarn Chon Dam has now shut its water gates to prevent the river from overflowing.

There were 183 cubic metres of water flowing into the river per second as of press time.