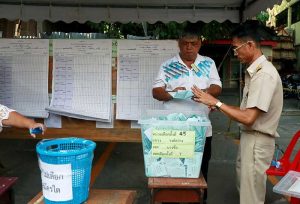 Officials begin the process of counting ballots after polls closed, during the general election in Bangkok, Thailand, March 24, 2019. Reuters

The U.S. State Department said on Tuesday that Washington looks forward to working with Thailand’s newly elected government and pressed Bangkok to release the results of the weekend vote as soon as possible while investigating any irregularities.

“We stand with the Thai people in calling for the expeditious announcement of voting results and a fair and transparent investigation of any reported irregularities,” State Department spokesman Robert Palladino told a news briefing.

“The United States looks forward to working with Thailand’s newly elected government to advance values that bring our countries closer together, including democracy, security and prosperity for all citizens,” he said.