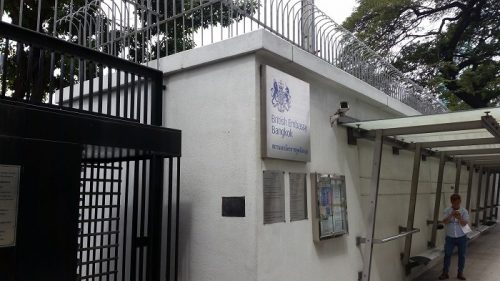 A petition has been started that aims to persuade the UK government to abandon plans to stop issuing proof of income letters to pensioners and other applicants.

The move was announced by poster “richiejom” on Thaivisa who said that the petition received 12 signatures in its first hour.

Other posters in the thread called for people to sign up.

Some British people in Thailand feel that their consular services are being degraded and they feel abandoned.

This comes despite claims made last year by the British ambassador who promised “top notch consular services”.

As of the 12th of December 2018 British Citizens can no longer request a proof of income letter required to obtain a Retirement or Extension based on Marriage visa in Thailand
Other Countries (sic) Embassy’s have an option to sign an affidavit that your income is true.

The Thai immigration has not made any announcement and still requests the letter. Failing this Retired or Married Brits may be forced to transfer between £9-18,000 to a Thai bank as proof.

Earlier in the week in one of the most closely followed issues on Thaivisa this year, the embassy said they were not verification experts and expats and retirees should in future arrange to have funds in Thai banks to satisfy visa requirements.

The last applications for income letters would be taken in December. This followed a meeting between the British embassy and Thai immigration in May in which the embassy said that the Thais expected the embassy to verify all sources of income.

Some British people have said that the embassy is well within their rights to stop the service under the circumstances but other Brits feel they have been abandoned.

Thaivisa contacted the embassy to say that many Thaivisa members have expressed concern at what they see as the eroding of consular services provided to British nationals.

Thaivisa sought a statement on the above concerns from the consular section or perhaps the ambassador himself.

The embassy replied as follows:

“We do not have a statement at the moment. If your members have any questions or concerns regarding the consular services, they can send e-mail to consularenquiriesbangkok@fco.gov.uk. Our consular team will take action on this”.

In September 2017 in an interview in “Expat Life in Thailand” published on Thaivisa the British ambassador Brian Davidson, 54, who took up the post in June 2016 said that the mission of the embassy could be summed up in three aims.

These were promoting a free and open society in Thailand, building stronger partnerships for mutual prosperity and, thirdly, “providing top notch consular and embassy services to all who avail of them”.

When contacted yesterday over claims made by the British embassy that the US authorities were also to follow suit in stopping the issuing of income letters the embassy advised Thaivisa to contact the US Embassy press office.

As of press time Thaivisa has yet to receive a reply from that office.

The above mentioned petition  can be accessed at:
https://petition.parliament.uk/petitions/230120/sponsors/new?token=DK30K4e4lQKtLa3JO0h8