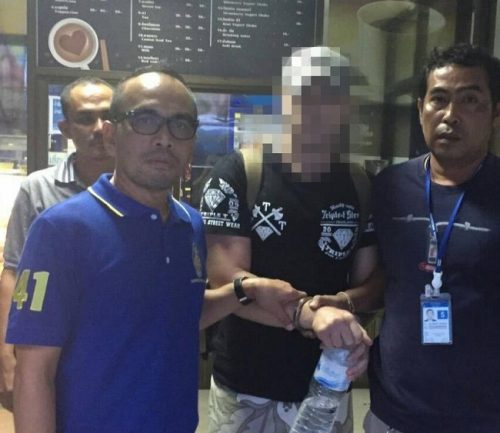 US suspect arrested in Koh Samui.

The American pedophile Jackson Hall, 24, has been arrested after he fled Bangkok to Koh Samui.

Hall – wanted in the US on a string of charges and who had been hiding out in Thailand for nearly a year – was apprehended at the port of Nathorn last night at 8pm on the holiday island.

A convicted felon Hall is wanted in Alabama for the rape of a 6 year old boy, other sexual molestation charges, giving false information to get a passport and identity theft.

He is believed to have stolen the identity of a man called Tyler Doran Smith – he had entered Thailand last October 6th at Aranyaprathet, Sa Kaew province using that name.

It is understood that he had English teaching jobs in both Khon Kaen and Rayong.

Immigration chief Natthathorn Phrohsunthorn said that police in Bangkok had discovered that Hall was living with Nittaya Beetge – an agent who helps find English teachers – in the Phasi Charoen area of Bangkok.

When police went there they found that they had missed Hall by a day and were told by Nittaya that he had fled to Samui. Contact was made with Samui immigration and Hall was arrested and is now being held on the island.

Nittaya’s estranged husband Darron Beetge now in South Africa with his six year old son said that he felt relieved and vindicated that the information that he had been able to supply in the case had proved to be correct.

Thai media have followed the case in detail since a report was made earlier in the year that Nittaya’s life may be in danger.

According to Mr Beetge his ex and Hall have had a child together, their baby daughter was born in August.

Claims have been made that Nittaya aided and abetted Hall during his time in Thailand.

One comment on “US Pedophile Suspect Arrested In Koh Samui”