Which Mobile Phone Service Provider Is Best In Thailand? 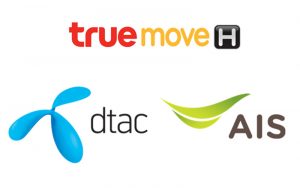 We have all used mobile phone services in Thailand but which one is best? Which provider offers the best coverage and service?

A report published recently by London based company “Open Signal”, may help you decide.

They rank the nation’s top three providers based on speed, availability and latency.

So which company fared best? Was it AIS, Dtac or TrueMove?

The report suggests that there is one clear winner and that is TrueMove.

In tests, TrueMove users can enjoy access to 4G, almost 95% of the time. That is exceptional performance it has to be said. AIS could only manage 89.22% with Dtac trailing behind on 84%.

True also came out ahead based on overall speed tests on both 3G and 4G platforms. Their average download speed of 9.68 Mbps, blew their rivals away.

But there is still room for improvement according to worldwide figures, as the average across the board is nearer 17 Mbps.

Things are getting better for mobile users in Thailand however as all three companies increased their 4G speed over the previous six months.

Time To Renew Your UK Passport ? Then Take Away All The Hassle With Key Visa