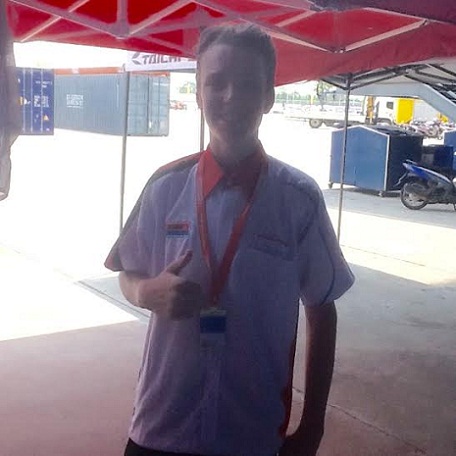 Colin and Steve had the pleasure of meeting up with 15 year old Australian rider Brock Pearson at the Buriram International Circuit.

Broc’s team consists of his father Ian and another Aussie rider Alex Cudlin who is acting in a coaching role. Alex races in the superbike 24 hours series and he and his privateer team are currently second in the series after the first round.

Young Brock first got onto a bike at 4 years old inspired by his dad who was also a notable racer in his day.

He started racing dirt track in Australia at an early age and has achieved 8 national titles and 13 interstate titles. 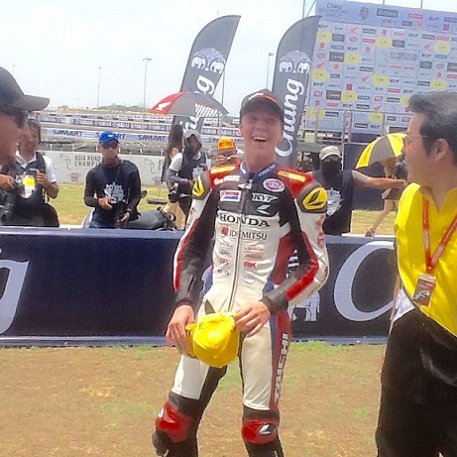 He took up road racing around 2 years ago in the ARRC Asia Dream Cup and last year finished in 7th position.

This weekend on Saturday he was in 3rd position on the last lap / last corner and was taken down along with 4 other riders. He did however re-mount to finish 10th for 5 valuable points.

On Sunday he got 3rd position with some cool tactical riding , staying clear of the mayhem on the infamous last bend for a great result.

Brock achieved  his first podium in the Dream Cup series although last year in the 2nd race at Buriram, he got 1st place after other riders were penalized but they had already mounted the podium before the officials’ report was issued.

Australia has produced great riders like Mick Doohan, Troy Bayliss, Casey Stoner and at 15 years of age Brock should be a name to look out for at a higher level of racing over the next few years.

He shows so much maturity not only in his riding ability but also the way he handles his media interviews with the press and the TV channels. This is very much down to him being a very nice guy who is still studying for his academic future and of course the guidance and support given by his dad Ian along with the rest of his family.

An even younger Brock 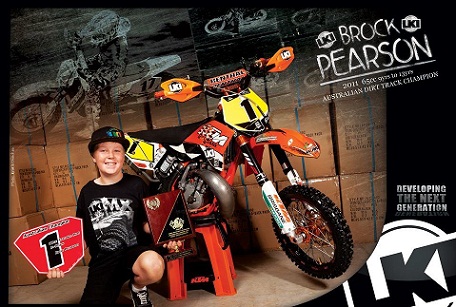 We at the “Buriram Times” wish him all the best for the season and look forward to seeing him and the team in Buriram for the last race in December.